A downloadable oscilloscope game for Windows, macOS, and Linux

This game is a Ludum Dare gamejam entry! You can follow me here on itch or on twitter for more stuff :)

Plonat Atek is a polar breakout-like game that is played by viewing the Audio output on a Vectorscope/Oscilloscope.

It also features an audiovisual (8-beat-short) soundtrack and sound effects! Since what you see on the 'scope is the sound, the sound effects double as visual feedback/impact effects and the soundtrack has been hidden in the graphics.

The project was built in PureData, a visual programming language for audio, or a digital modular synthesizer if you will. It requires a few modules from zexy, an extension to vanilla PureData (I have created this game in pd-extended, which includes zexy and other extensions).

There is also a .wav file for those who cannot or don't want to run PureData but want to check if that sound-is-image thing is really true :P

You will also either need a real Oscilloscope (in which case I would loooove a video of yours!) or an emulator, like these two:

You can find some proof of it running on my scope in my ldjam feed and on twitter.

Unfortunately the Setup takes a few steps. It is worth it in my experience though - not because of my game, but because of all the other stuff you can look at as well:

On Windows, you can download the Windows Bundle, which contains the source patch, PureData itself, and the simplest Oscilloscope Emulator I could find.

This Oscilloscope emulator is the most basic though, and looks the worst - it really doesn't showcase the game well, so if you are willing to spend a bit more time or effort than just unpack + doubleclick, and maybe learn a bit about the audio signals you hear every day, I strongly encourage you to read the download and setup instructions for a full setup guide.

Just open run.bat and when everything has opened and you hear loud, random sounds, focus a PureData window and use the arrow keys to play.

this is so impressive

This is kind of freaking amazing.

this is so twilight  XD 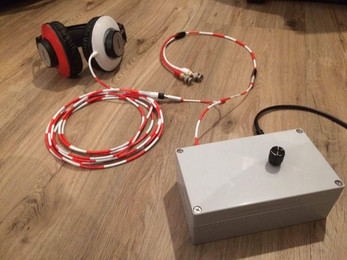 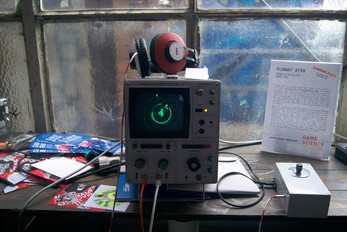